August 29, 2020  A Dallas-area taxi driver wanted by the FBI for the 2008 suspected honor killings of his two teenage daughters was captured on Wednesday in a small North Texas town.
FBI SWAT team members arrested Yaser Abdel Said, 63, without incident in Justin, 36 miles northwest of Dallas. The Egyptian-born suspect had been sought on a capital murder warrant since the New Year's Day 2008 fatal shootings of the two Lewisville High School students, Sarah Yaser Said, 17, and Amina Yaser Said, 18.  They were dating non-Muslims.
The FBI also announced the arrests of Yaser's Said's son, Islam Said, 32, and his brother, Yassim Said, 59. They both face charges for harboring a fugitive.

Female genital mutilation (FGM), also known as female genital cutting (FGC), is practised in 30 countries in western, eastern, and north-eastern Africa,[1] in parts of the Middle East[2][3] and Asia,[4][5] and within some immigrant communities in Europe, North America and Australia.[1][6] The WHO defines the practice as "all procedures that involve partial or total removal of the external female genitalia, or other injury to the female genital organs for non-medical reasons."[7]
In a 2013 UNICEF report covering 29 countries in Africa and the Middle East, Egypt had the region's highest total number of women that have undergone FGM  (27.2 million), while Somalia had the highest percentage (prevalence) of FGM (98%).[8]  (Wikipedia.org)

[As for] the thief, the male and the female, amputate their hands in recompense for what they committed as a deterrent [punishment] from Allah . - Quran 5:38

The deficiency in a woman's mind

Homosexuals "should be thrown from a tremendous height and then stoned" according to Muhammed. 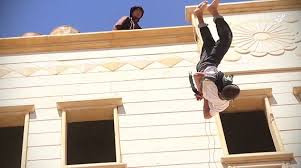 
Police in Northern Nigeria raided an Islamic school for boys and report finding 300 students chained in a dungeon where many were repeatedly raped and tortured, the Daily Mail reported.

3000 Yazidi sex slaves are lost and feared dead. This story should be in headlines everywhere. Is it? Are the lives of Yazidi girls and women so valueless in the eyes of the Western media? Add to that the fact that thousands of other Yazidi sex slaves who were tortured and murdered. Where also are the human rights activists? Why do they ignore these victims of jihad terror and abuse?

Iraqi girls as young as 9-years-old are being sold for sex in temporary “pleasure marriages” that can last as little as one hour long, an undercover BBC documentary has revealed.  Shia clerics were filmed offering to perform temporary “pleasure marriages” under Islamic laws, allowing adult men to rape children without technically breaking Sharia law.

Men are usually banned from having sex outside marriage but can skirt the law by paying a dowry for an interim wife.Speaking to an undercover reporter, one cleric was filmed claiming it would be “no problem at all” to temporarily marry girls as young as nine under Islamic law.

Although the practice is banned in Iraq, eight out of 10 Shia clerics who were approached were willing to carry it out.One of the clerics even offered to help procure young girls, the BBC News investigation found.Have your say – One Shia cleric claims that it’s ‘no problem’ to temporarily marry and rape a 9-year-old girl According to the Daily Mail, the religious rite dates back centuries, partly intended to allow men to have a legitimate relationship while away from their wives.

However, some Iraqi men and Shia clerics are now abusing it to give a veneer of legitimacy to child prostitution. “According to Sharia, there’s no problem,” he said when asked if it was acceptable to conduct a temporary marriage with a young girl. When the reporter voiced concern that he was exploiting the girl, the cleric told him: “No way.”  Another cleric, also filmed secretly, was asked if a temporary marriage with a 13-year-old virgin would be permissible under Islamic law.  “Just be careful she doesn’t lose her virginity,” the cleric replied, suggesting other forms of sexual interaction instead. Asked what happens if the girl gets hurt, the cleric said: “That’s between you and her.” Avoid Internet censorship by subscribing to us directly. Later in the documentary, that second cleric went even further and offered to help procure the girls as well as conducting the marriages.

Offering to take a photo of a girl and send it to the undercover client, he added: “Then when you come back, she’s yours.”  That cleric also reassured the reporter that there was no child exploitation taking place.  “She was willing and you paid her,” he said.  The length of the marriage must be specified in advance and can be fixed at anything from one hour to 99 years. Some girls said that clerics had provided them with contraceptive injections to ensure they did not become pregnant.

One cleric even offered to procure children for adults looking engage in a ‘pleasure marriage’ The practice is not permitted under Sunni Islam and was banned under Saddam Hussein’s Sunni-led government. However, the practice flourished in the wake of the 2003 invasion as Iraq’s new government struggled to impose its authority on the country and Shia clerics grew in influence.  One girl said she could not even remember how many times she had been “married” and said she relied on the dowries for her income.  Young women also fear that losing their virginity in a temporary marriage will leave them unable to find a permanent husband in future.

One 14-year-old said she feared the consequences if a future husband found out that she was not a virgin.  However, an Iraqi government spokesman said there was little that authorities could do if girls did not complain to the police.   “If women don’t go to the police with their complaints against clerics, it’s difficult for the authorities to act,” they told the BBC.

Leaving the Muslim religion is punishable by death in 13 countries.

The Arabs' treatment of black Africans can aptly be termed an African Holocaust. Arabs killed more Africans in transit, especially when crossing the Sahara Desert, than Europeans and Americans, and over more centuries, both before and after the years of the Atlantic slave trade. Arab Muslims began extracting millions of black African slaves centuries before Christian nations did. Arab slave traders removed slaves from Africa for about 13 centuries, compared to three centuries of the Atlantic slave trade. African slaves transported by Arabs across the Sahara Desert died more often than slaves making the Middle Passage to the New World by ship. Slaves invariably died within five years if they worked in the Ottoman Empire's Sahara salt mines. (Prisons & Slavery, by John Dewar Gleissner)

Marry women of your choice, Two or three or four; but if ye fear that ye shall not be able to deal justly (with them), then only one, or (a captive) that your right hands possess, that will be more suitable, to prevent you from doing injustice.— Qur'an, Sura 4 (An-Nisa), Ayah 3[1]

The Federal Bureau of Investigation (FBI) has suspended all formal contacts with CAIR due to evidence demonstrating a relationship between CAIR and HAMAS, a designated Foreign Terrorist Organization;

In 2014, in a youtube clip, author Brigitte Gabriel gave a FANTASTIC answer to a Muslim woman claiming that all Muslims are portrayed badly (https://www.youtube.com/watch?v=Ry3NzkAOo3s). She is the founder and CEO of ACT for America who responded as above. Some highlights are the following. She was part of a panel that was re: the Benghazi attack on “our” people where “four Americans” were killed and what our government could do about it. She eloquently responded back to that student (who probably had good intentions in asking her question) that no one was bashing Muslims on the panel, one that was devoted solely towards The Benghazi attack and what our government was going to do about it. In fact, no one the panel brought that up. She points out: 1.2 billion Muslims as the world’s muslim population; 15 to 25% of them are radical muslims which equates to 180 million to 300 million of muslim people dedicated to the destruction of the Western civilization.
She continues as to why should we worry about these 15 to 25% (a populous as much as there is in our country)? She notes: it is these radicals that behead and massacre; lessons in history teach us this. Most Germans were peaceful and yet it was the minority Nazi’s that drove the agenda, killing 60 million people, 14 million in concentration camps (6 million being Jews); The peaceful majority were irrelevant. In Russia, most were peaceful; however, the Russians killed 20 million people. The peaceful majority were irrelevant. Historically regarding China, most Chinese were peaceful; however, yet the Chinese were able to kill 70 million people. The peaceful majority were irrelevant. When you look at Japan before WWII, most Japanese were peaceful; however, Japan’s totalitarianism was able to butcher its way over Southeast Asia killing 12 million people (mostly with bayonets and shovels). The peaceful majority were irrelevant. On 9/11, there were 2.7 million Arab Americans living in our country. However, it took 19 hijackers/radicals to destroy the WTC and kill 3,000 Americans. The peaceful majority were irrelevant.
She plainly asks: I’m glad you pose the question. But where are the others speaking out? She asked that student: instead of standing up here and asking the Benghazi panel about our 4 Americans who were killed, you stood there to highlight peaceful moderate muslims. She declared: it is time to throw political correctness in the garbage and address the problem… Radical Islamic Terrorism.

Perhaps the most important statistic which stands out comes from the United Nations itself, which reports that 75% of the migrants are “young, fit males.” I believe it was Mark Steyn who wryly noted, “That’s not the demographics of a civilian population displaced by war, that’s the demographics of an army.” Ironically, even a handmade sign (see photo below) by migrants camped in Calais, France proves the point: out of the camp’s population of 3455, 2861 are men… 82.8%.
If nothing else, this may be a resource for others to help “make the case” to their elected representatives as to why we need a complete moratorium on Muslim immigration (a component of what I call “Sandboxing Islam”) so as to avoid Europe’s fate.
Europe as we have known it since 1945 will no longer exist by 2020. Truth be told, it no longer exists now.
Really, to even skim the multiple dozens of news stories below is overwhelming. Where to start?
For the needed context to understand what we are experiencing, I would recommend Robert Spencer’s excellent article from September 4, 2015, THE HIJRAH INTO EUROPE – “Refugees” colonize a continent, which he begins as follows:
“Approximately 104,460 asylum seekers arrived in Germany during the month of August, setting a new record. That makes 413,535 registered refugees and migrants coming to Germany in 2015 so far. The country expects a total of around 800,000 people to seek asylum in Germany this year. And that’s just Germany. The entire continent of Europe is being inundated with refugees at a rate unprecedented in world history. This is no longer just a ‘refugee crisis’. This is a hijrah.”
Further reading:  Confronting the Deception:  Inflamed by 9/11, Fired up by Eight Bad Years, by Tabitha Korol